50 Thoughtful Quotes About the Consequences of Overthinking

Constantly thinking about distressing situations from the recent past or trying to read between the lines is one of the most destructive mental habits. It can not only steal our confidence, but also the ability to solve problems. Given below is a list of overthinking quotes and sayings, which almost everybody can relate to.

Home / Inspirational Quotes / 50 Thoughtful Quotes About the Consequences of Overthinking

Constantly thinking about distressing situations from the recent past or trying to read between the lines is one of the most destructive mental habits. It can not only steal our confidence, but also the ability to solve problems. Given below is a list of overthinking quotes and sayings, which almost everybody can relate to. 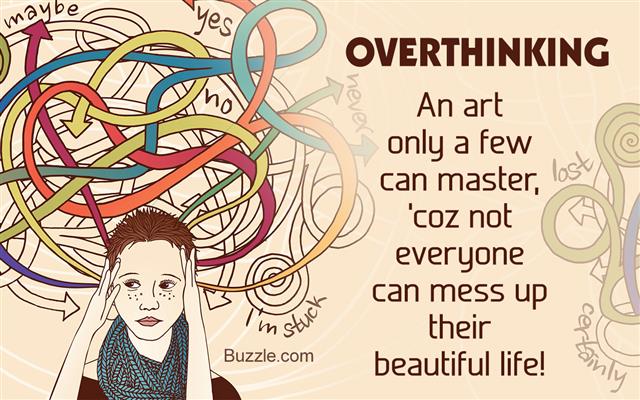 If you are sure that you will overthink, commit to it for a short period of time. Set a timer for 15 minutes, grab a paper and a pen, jot down everything that comes to your mind. When the 15 minutes are up, burn the sheet or do whatever that takes your mind off it.

There are people who think, but again there are some people who overthink. Don’t get the difference? An overthinker will break down one simple sentence into teeny tiny pieces and overanalyze everything. This is overthinking, trust me we all have been through that and 98% of the people can relate to it. It can be anything maybe an amazing job opportunity, career dilemma, or a hi from your crush or an ex. Overthinking can destroy relationships and it can eventually lead to negative thoughts, which will push us in depression.

Overthinking process starts, if you end up thinking about a simple scenario, which is plain simple but your devil mind makes you believe that it has a hidden message. Your super genius mind starts working, trying to decode that message. In your head the worst case scenario always has to come true. You worry about everything, and there’s no off button for it. Every time you get a headache – you feel it’s a brain tumor, you have put on weight – it’s thyroid.

Imagine this scenario, if a guy from your class asked you if he could borrow your notes for the test. You will start thinking, “Why did he ask me?, Why didn’t he ask his girlfriend?, Did they break up?, Is this the reason why she has been giving me cold stares?, Maybe he likes me and wants to leave a love letter in my notes?, What if he does not like my handwriting? And it goes on and on. Overthinking is not just healthy, but it robs you with the ability to control your mind.

Of the numerous quotes that aptly express the habit of overthinking, we have selected 50 such examples that include quotes from famous people; while the source of some are anonymous.

Quotes About Overthinking Everything

“We are dying from overthinking. We are slowly killing ourselves by thinking about everything. Think. Think. Think. You can never trust the human mind anyway. It’s a death trap.”
― Anthony Hopkins

“Don’t get too deep, it leads to over thinking, and over thinking leads to problems that don’t even exist in the first place.”
― Jayson Engay

“Stop overthinking, stop worrying, stop complaining, life is too short for all of that.”
― Anonymous

“We spend too much time overanalyzing, overthinking, and overreacting.”
― Anonymous

“My father taught me not to overthink things, that nothing will ever be perfect, so just keep moving and do your best.”
― Scott Eastwood

“When a girl is silent, she’s either over-thinking, tired of waiting, falling apart, crying inside, or all of the above.”
― Anonymous

“Remember absolutely nothing good can come out of overthinking it.”
― Anonymous

“I don’t overthink when I’m styling. I kind of forgive myself and accept that I will make mistakes. Getting dressed should be a fun experience!”
― Paloma Faith

“Overthinking can literally make you insane, and can cause a mental breakdown.”
― Anonymous

“I lay in bed every night and overthink everything.”
― Anonymous

“This is probably the advantage of being stupid. Stupid people just do. We tend to overthink. If we could eliminate the “over” and just think, then we could do, too. Only we’d be smarter doers because we’d be thinkers.”
― Sarah Strohmeyer

“Don’t overthink things. Sometimes you can convince your head not to listen to your heart. Those are the decisions you regret for the rest of your life.”
― Leah Braemel

“Overthinking ruins you. Ruins the situation, twists things around, makes you worry & just make everything much worse than it actually is!”
― Anonymous

“Sometimes you have to stop thinking so much and just go where your heart takes you.”
― Anonymous

“My attention span is all over the place, and I overthink things. I’m an insomniac.”
― Selena Gomez

“I overthink a lot of things.”
― Lee DeWyze

“The sharpest minds often ruin their lives by overthinking the next step, while the dull win the race with eyes closed.”
― Bethany Brookbank

“Don’t overanalyze what you see. I have a feeling that you’re over-thinking things. Give it some time, and the pieces of this puzzle might come together.”
― Jessica Park

“You can spend minutes, hours, days, weeks and months over thinking the past. Trying to put together pieces, imagining what could’ve been, should’ve been or would’ve been. Or you can pick up the pieces off the floor and move on as a stronger, smarter person.”
― Anonymous

“Ana, honey, you’ve always had a tendency to overanalyse everything. Go with your gut.”
― E.L. James, Fifty Shades of Grey

“I want to cut off the piece off my brain that is doing all this overthinking.”
― Anonymous

“I have realized sometimes I do better working under a crazy schedule. It gives me less time to overthink things and forces me to be present.”
― Torrey DeVitto

“It’s harder to score well in a slow round. The tendency is to overthink shots while you’re waiting and become mentally exhausted. Instead, chat with your playing partners about anything but golf. Concentrate on each shot for no more than a minute. You’ll stay fresh.”
― Rickie Fowler

“Don’t think. It complicates things. Just feel, and if it feels like home, then follow its path.”
― R.M. Drake

“I second-guess and overthink and rethink every single thing that I do.”
― Taylor Swift

“What you fear will not go away by constantly thinking about it, it will go away when you see it for exactly what it is.”
― Anonymous

“You can’t be that kid standing at the top of the water slide, overthinking it. You have to go down the chute.”
― Tina Fey

“The more you overthink the less you will understand.”
― Habeeb Akande

“Stop thinking too much. It’s alright not to know the answers. They will come to you when you least expect it.”
― Anonymous

Night time;
When the smiles fade, overthinking starts and the tears fall.”
― Anonymous

“Overthinking can cause the mind to experience “emotional hangovers” which leads to depression.”
― Anonymous

“When somebody asks me a question, I try to be as straightforward about it as possible. I try not to overthink what I’m going to say in an interview.”
― Shirley Manson

Don’t think too much. You’ll just create a problem that wasn’t even there in the first place.”
― Anonymous

“I stopped over thinking when I realized that I’m really not that smart.”
― Bob Miglani

“We often want it so badly that we ruin it before it begins. Over-thinking. Fantasizing. Imagining. Expecting. Worrying. Doubting. Just let it naturally evolve. The deepest of a woman’s insecurities often come from the men who have hurt them. Not every man is the same. If you feel that they are, you are looking for the wrong type of men.”
― Anonymous

“Sometimes we waste too much time thinking about someone who doesn’t even think about us for a second.”
― Wiz Khalifa

“There is nothing either good or bad but thinking makes it so.”
― William Shakespeare

“Overthinking is often a product of underdoing.”
― Yehuda Berg

“Overthinking is the biggest cause of our unhappiness. Keep yourself occupied. Keep your mind off things that don’t help you. Think positively.”
― Anonymous

“Thinking is good. Overthinking can end things before they ever get the chance to develop.”
― Anonymous

“The thing with ‘Pippin’ is not to over think it too much. If you try and overthink or plan and over-analyze – it’s like with any role really, but this one specifically – you can run into sogging wet newspaper. It’s just too exciting to do that. It’s nice to be bounced around and surprised at almost every line that comes out of your mouth.”
― Matthew James Thomas

“I tend to overthink things. I’m not the guy who screams ‘This is a world smash!’ when I finish a song.”
― Bruno Mars