30 Quotes About Two-faced People That are Just Too Real

We live in this world where there is competition in every little thing or evil intentions behind every good deed. It's getting more and more difficult to trust people because almost everyone is good to your face, but many may not be good behind your back. These are called two-faced people or fake people. In this Quotabulary post, we have compiled some quotes about them.

We live in this world where there is competition in every little thing or evil intentions behind every good deed. It’s getting more and more difficult to trust people because almost everyone is good to your face, but many may not be good behind your back. These are called two-faced people or fake people. In this Quotabulary post, we have compiled some quotes about them.

Dealing with a Two-faced Person!
When you know that a certain person is like this, first accept it and know that he/she is never going to be an honest friend. Try not getting angry and aggressive, instead just confront them and tell them that you don’t like their behavior. Also, avoid sharing any personal information with them. Last but not the least, do not take it to your heart and don’t think about playing the same game with them.

Two-faced people are the ones who act like your best friend around you but are ready to back-stab you anytime. They may behave very sweetly with you, but the moment you turn your back, they will be the opposite. They may say bad things about you and spread rumors. Having them around can make life difficult.

You cannot afford to trust them or tell them about your aspirations, and there’s no point expecting any honesty from such people. They will be selfish, and most often, deceive you. Understand that they are just not worthy of your friendship. Ignore them and move on with your life! And make sure that you never become one of them.

Here is a compilation of some great quotes which you will be able to relate to, if you have come across fake people in your life.

If I were two-faced, would I be wearing this one?
― Abraham Lincoln

When I see you, I think “I wonder which face she sees when she looks into the mirror.”
― C. JoyBell C.

If you’re gonna be two-faced at least make one of them pretty.
― Marilyn Monroe

I think there are two different oceans – the one that plays with you in the summer, and the one that gets so mad in the winter.
― Jodi Picoult, Handle with Care

A hypocrite is a person who – but who isn’t?
― Don Marquis

You’re just like a penny, two-faced and worthless.
― Unknown

Many of us believe that wrongs aren’t wrong if it’s done by nice people like ourselves.
― Unknown

Don’t trip over your own words and fall into hypocrisy.
― Unknown

I hope you have not been leading a double life, pretending to be wicked and being good all the time. That would be hypocrisy.
― Oscar Wilde

A man can define many things beautifully in his life, but his character is one beautiful thing that can define him instantly and completely.
― Anuj Somany

Hypocrisy has its own elegant symmetry.
― Julie Metz

Without wearing any mask we are conscious of, we have a special face for each friend.
― Oliver Wendell Holmes

Every veil secretly desires to be lifted, except the veil of Hypocrisy.
― Richard Garnett

Remember, there are two sides to every story. Kinda like your face!
― Unknown

Few love to hear the sins they love to act.
― William Shakespeare

Being nice to the people you don’t like isn’t called two-faced, it’s called growing up.
― Unknown

The greatest way to live with honor in this world is to be what we pretend to be.
― Socrates

Go put your creed into your deed, Nor speak with double tongue.
― Ralph Waldo Emerson

We ought to see far enough into a hypocrite to see even his sincerity.
― Thomas Fuller

I’d rather deal with thick-faced people rather than wasting time with two-faced ones.
― Unknown

God has given you one face, and you make yourself another.
― William Shakespeare

Facebook is where hypocrisy, falseness, double standards, rumors and depression meet up for coffee.
― Unknown

Live truth instead of professing it.
― Elbert Hubbard

Hypocrisy is the outward acknowledgment of inward shame.
― Norman MacDonald

We have two kinds of morality side by side: one which we preach but do not practice and another which we practice but seldom preach.
― Bertrand Russell

When people are two-faced, the only thing you’ll know for sure is that you can’t trust either of them.
― Unknown 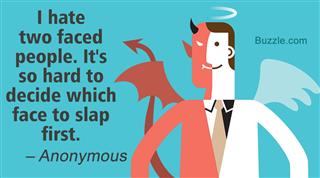 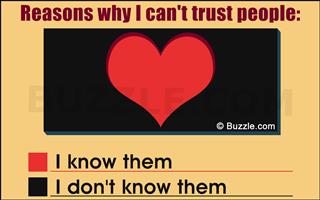