Need something crazy to get away from all the madness in your life? Here is just what you need... 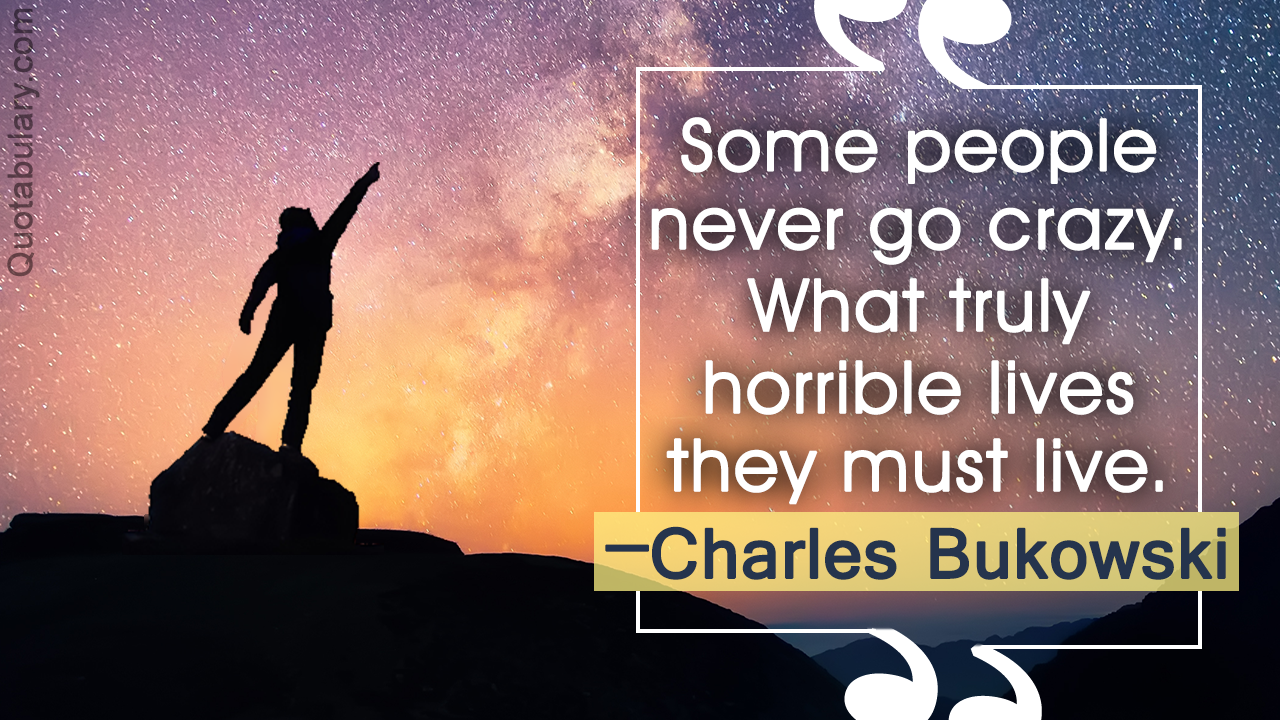 Need something crazy to get away from all the madness in your life? Here is just what you need…

There comes a time in everyone’s life when you get tired of being sane and acting sane. There are times when you just want to let go, act stupid, and have fun. And if that is what you decide, there are a lot of things that you can do. So before you go shave half your head or get hungover in Las Vegas, here are a few quotes to give just the extra push that you need. These quotes are well, just plain crazy, which help in lightening up anyone’s mood, anytime! So go ahead and read these crazy quotes to get going, and if nothing, just to have a good laugh!

I would imagine that if you could understand Morse code, a tap dancer would drive you crazy. ~ Mitch Hedberg

We are all crazy, but those that analyze their craziness are called philosophers. ~ Anonymous

My psychiatrist told me I’m going crazy. I told him, ‘If you don’t mind I’d like a second opinion.’ He said, ‘All right… you’re ugly too!’ ~ Rodney Dangerfield

Some people hear their own inner voices with great clearness. And they live by what they hear. Such people become crazy… or they become legends. ~ Jim Harrison

Dreams are often most profound when they seem the most crazy. ~ Sigmund Freud

A question that sometimes drives me hazy: am I or are the others crazy? ~ Albert Einstein

Love is a crazy thing. It sucks and is totally overrated. ~ Anonymous

A man is already halfway in love with any woman who listens to him. ~ Anonymous

If love is the answer, could you rephrase the question? ~ Anonymous

Don’t make love by the garden gate. Love is blind, but the neighbors are not. ~ Anonymous

I was nauseous and tingly all over. I was either in love or I had smallpox. ~ Woody Allen

Love is the gross exaggeration of the difference between one person and everybody else. ~ George Bernard Shaw

A man in love is incomplete until he is married. Then he’s finished. ~ Zsa Zsa Gabor

My advice to you is get married: if you find a good wife you’ll be happy; if not, you’ll become a philosopher. ~ Socrates

Crazy + Friends = Total Awesomeness My friends and I are crazy. That’s the only thing that keeps us sane. ~ Matt Schucker

You can always trust the information given to you by people who are crazy; they have an access to truth not available through regular channels. ~ Sheila Ballantyne

I cannot forgive my friends for dying; I do not find these vanishing acts of theirs at all amusing. ~ Anonymous

The best time to make friends is before you need them. ~ Anonymous
T
rue friends stab you in the front. ~ Oscar Wilde

Love is blind. Friendship tries not to notice ~ Anonymous

Friendship is born at that moment when one person says to another, ‘What! You too? I thought I was the only one! ~ C. S. Lewis
T
he statistics on sanity are that one out of every four Americans is suffering from some form of mental illness. Think of your three best friends. If they’re okay, then it’s you. ~ Rita Mae Brown

It’s amazing the clarity that comes with psychotic jealousy. ~ My Best Friend’s Wedding

Do you know how hard it is to find a decent man in this town? Most of them think monogamy is some kind of wood. ~ The Mask

Yeah I called her up, she gave me a bunch of crap about me not listening to her, or something, I don’t know, I wasn’t really paying attention. ~ Dumb and Dumber

Name’s Barf. I’m a Mog, half man half dog. I’m my own best friend. ~ Spaceballs

I’ve got a good mind to join a club and beat you over the head with it. ~ Duck Soup

If I’m not back in five minutes… wait longer! ~ Ace Ventura: Pet Detective

Just a lil more Crazy… I don’t like myself, I’m crazy about myself! ~ Mae West

You know the world is going crazy when the best rapper is a white guy, the best golfer is a black guy, the tallest guy in the NBA is Chinese, the Swiss hold the America’s Cup, France is accusing the U.S. of arrogance, Germany doesn’t want to go to war, and the three most powerful men in America are named ‘Bush’, ‘Dick’, and ‘Colon.’ Need I say more? ~ Chris Rock

Don’t let people drive you crazy when you know it’s in walking distance. ~ Anonymous
We’re all crazy and the only difference between patients and their therapists is the therapists haven’t been caught yet. ~ Max Walker

What sane person could live in this world and not be crazy? ~ Ursula K. LeGuin

I was crazy back when being crazy really meant something. ~ Charles Manson
O
f course I’m crazy, but that doesn’t mean I’m wrong. ~ Robert Anton Wilson

I am sure these quotes must have made you laugh, again and again. At the end of that day, whenever you’re feeling down, just read these quotes, because — Sometimes, the only way to stay sane is to go a little crazy.