Generosity, or the quality of being kind and giving, is something every individual should instill in him/herself. Many famous personalities have said a lot good about the quality of being generous and kind. Quotabulary cites some such sayings and quotations that foster generosity.

Generosity, or the quality of being kind and giving, is something every individual should instill in him/herself. Many famous personalities have said a lot good about the quality of being generous and kind. Quotabulary cites some such sayings and quotations that foster generosity. 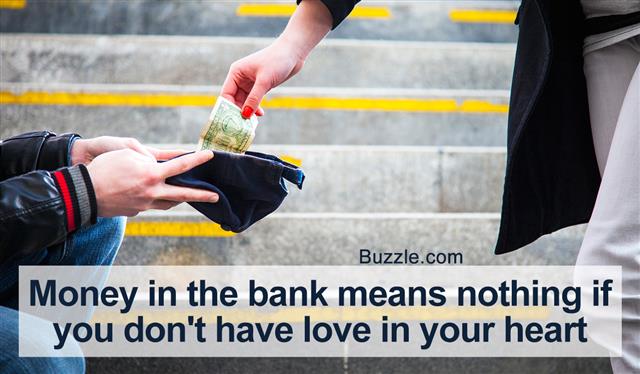 The Bill and Melinda Gates Foundation

Being United States’ top charitable foundation, it has endowed a total of 42.3 billion dollars with an aim to reduce extreme poverty, and enhance healthcare across the world.

Generosity cannot be taught. It should come from within. But, don’t confuse charity with generosity. Charity accompanied by the feeling or attitude of not expecting anything in return is generosity.

Generosity doesn’t mean donating money to an NGO. It’s far greater than that. You can be generous in terms of time, love, attention, and good deeds. Compassion and helping our fellow humans is something that’s strongly required in this cruel selfish world.

Take a look at some generosity quotes and sayings given below, and make an effort to impart as well as instill this noble value in yourself.

Quotes About Being Generous

“Gentleness, self-sacrifice and generosity are the exclusive possession of no one race or religion.”
― Mahatma Gandhi

“There is no exercise better for the heart than reaching down and lifting people up.”
― John Holmes

“Generosity is giving more than you can, and pride is taking less than you need.”
― Steve Maraboli

“Goodness is about character – integrity, honesty, kindness, generosity, moral courage, and the like. More than anything else, it is about how we treat other people.”
― Dennis Prager

“In the end, though, maybe we must all give up trying to pay back the people in this world who sustain our lives. In the end, maybe it’s wiser to surrender before the miraculous scope of human generosity and to just keep saying thank you, forever and sincerely, for as long as we have voices.”
― Elizabeth Gilbert

“True generosity is an offering; given freely and out of pure love. No strings attached. No expectations. Time and love are the most valuable possession you can share.”
― Suze Orman

“That’s what I consider true generosity: You give your all, and yet you always feel as if it costs you nothing.”
― Simone de Beauvoir

“I am a generous man, by nature, and far more trusting than I should be. Indeed. The real world is risky territory for people with generosity of spirit. Beware.”
― Hunter S. Thompson

“You have not lived today until you have done something for someone who can never repay you.”
― John Bunyan

“To practice five things under all circumstances constitutes perfect virtue; these five are gravity, generosity of soul, sincerity, earnestness, and kindness.”
― Confucius

“Sustainability, ensuring the future of life on Earth, is an infinite game, the endless expression of generosity on behalf of all.”
― Paul Hawken

“Attention is the rarest and purest form of generosity.”
― Simone Weil

“Generosity could be as contagious as the zombie plague as long as enough people were willing to be carriers.”
― Jonathan Maberry

“Money is but one venue for generosity. Kindness is an even more valuable currency.”
― Alan Cohen

“The value of a man resides in what he gives and not in what he is capable of receiving.”
― Albert Einstein

“Think of giving not as a duty but as a privilege.”
― John D. Rockefeller Jr.

“Believe, when you are most unhappy, that there is something for you to do in the world. So long as you can sweeten another’s pain, life is not in vain.”
― Helen Keller

“Since you get more joy out of giving joy to others, you should put a good deal of thought into the happiness that you are able to give.”
― Eleanor Roosevelt

“No person was ever honored for what he received. Honor has been the reward for what he gave.”
― Calvin Coolidge

“Giving frees us from the familiar territory of our own needs by opening our mind to the unexplained worlds occupied by the needs of others.”
― Barbara Bush

“Remember that there is no happiness in having or in getting, but only in giving. Reach out. Share. Smile. Hug. Happiness is a perfume you cannot pour on others without getting a few drops on yourself.”
― Og Mandino

“Give what you have. To someone, it may be better than you dare to think.”
― Henry Wadsworth Longfellow

“Minds, nevertheless, are not conquered by arms, but by love and generosity.”
― Baruch Spinoza

“The only gift is a portion of thyself.”
― Ralph Waldo Emerson

“There is overwhelming evidence that the higher the level of self-esteem, the more likely one will be to treat others with respect, kindness, and generosity.”
― Nathaniel Branden

“Real generosity toward the future lies in giving all to the present.”
― Albert Camus

“The best way to find yourself, is to lose yourself in the service of others.”
― Mahatma Gandhi

“Ah! What pleasure it must be to a woman to suffer for the one she loves!”
― Honoré de Balzac

“If we are going to be kind, let it be out of simple generosity, not because we fear guilt or retribution.”
― J.M. Coetzee

“The wise man does not lay up his own treasures. The more he gives to others, the more he has for his own.”
― Lao Tzu

“You make all kinds of mistakes, but as long as you are generous and true and also fierce, you cannot hurt the world or even seriously distress her.”
― Winston S. Churchill

“True generosity is too frequently eaten up by prosperity and riches.”
― Ellen G. White

“Humanity is the virtue of a woman, generosity that of a man.”
― Adam Smith

“Pride only helps us to be generous; it never makes us so, any more than vanity makes us witty.”
― George Eliot

“When you win and the other fellow loses, what do you see? A losing face. There is great joy in losing and making the other person win and have a happy face. Who will be the happiest person? The one who brings happiness to others.”
― Swami Satchidananda

“I expect to pass through this world but once; any good thing therefore that I can do, or any kindness that I can show to any fellow creature, let me do it now; let me not defer or neglect it, for I shall not pass this way again.”
― Etienne de Grellet

“We should give as we would receive, cheerfully, quickly, and without hesitation; for there is no grace in a benefit that sticks to the fingers.”
― Seneca

“When you become detached mentally from yourself and concentrate on helping other people with their difficulties, you will be able to cope with your own more effectively. Somehow, the act of self-giving is a personal power-releasing factor.”
― Norman Vincent Peale

“Listen with regard when others talk. Give your time and energy to others; let others have their own way; do things for reasons other than furthering your own needs.”
― Larry Scherwitz

“The greatest gift you ever give is your honest self.”
― Fred Rogers

“I gave you all my secrets and you lost them all. You lost a lot of things.
But the treasure of it was in the giving, not the keeping.”
― Julio-Alexi Genao

“Unless we think of others and do something for them, we miss one of the greatest sources of happiness.”
― Ray Lyman Wilbur

“Give a bowl of rice to a man and you will feed him for a day. Teach him how to grow his own rice and you will save his life. “
― Confucius

Hope you learned a lot about generosity, and kindness from these quotes. So go ahead, inculcate the habit of giving in yourself without expecting for anything in return.