40 Oh-so-relatable Quotes About Getting the Monday Blues

After a wonderful weekend comes the dreadful 'Monday', wherein everybody is back to their business. Monday blues are indeed difficult to combat, thus marking the start of a monotonous routine. To celebrate the fact that the whole world suffers from it, the following are 40 funny Monday blues quotes with some pictures.

After a wonderful weekend comes the dreadful ‘Monday’, wherein everybody is back to their business. Monday blues are indeed difficult to combat, thus marking the start of a monotonous routine. To celebrate the fact that the whole world suffers from it, the following are 40 funny Monday blues quotes with some pictures. 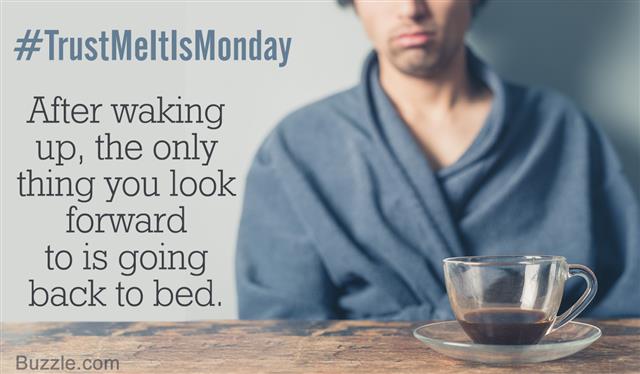 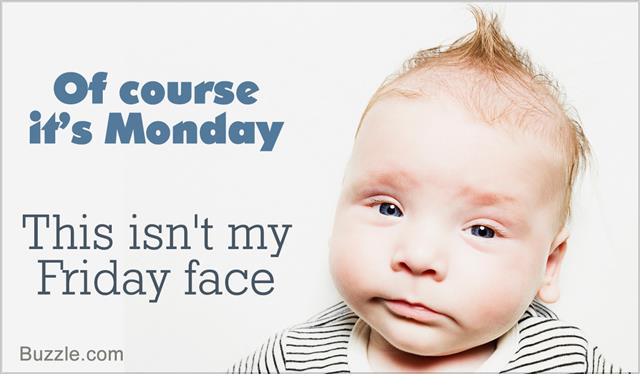 Books Based on Mondays

‘Monday Mornings’ by Sanjay Gupta
‘Monday Mourning’ by Kathy Reichs
‘Mister Monday’ by Garth Nix
‘What Do I Do Monday?’ by John Holt

As I was driving to office today (today is a Monday!), I could feel something common in the traffic around: everyone had ‘that’ look on their faces! ‘It’s a Monday! Whoppie!’ – Of course no one is going to exclaim ‘that’ unless they don’t have their bosses getting on their nerves for meeting deadlines, or a pile of work waiting for them. Okay, now some who really, really love their work might be on their toes to reach their offices. Alas, though, they might be a handful only, and for the rest of the majority, it is time for Monday blues. Trust me, it is rather difficult to bid adieu to the lovely Sunday and embrace a Monday. It requires serious motivation to bid farewell to your bed and say shoo to your beauty sleep. And when we manage to drag ourselves to our offices, the only consolation we have is, almost everyone else in the world shares this feeling!

So here are a few Monday quotes and sayings that might help you survive through this dreadful day.

“Mondays are mundane, like Tuesdays minus 24 hours. ”
― Jarod Kintz, This Book Title is Invisible

“Monday is a great for becoming too busy to die.”
― Roy Station, Trust Me.

“I don’t like Mondays, especially if they occur on Fridays.”
― Jarod Kintz, This Book is Not FOR SALE

“There are no miracles on Mondays.”
― Amy Neftzger, The Orphanage of Miracles

“When you’re young and healthy you can plan on Monday to commit suicide, and by Wednesday you’re laughing again.”
― Marilyn Monroe, My Story

“Monday is an awful way to spend 1/7 of your life.”
― Steven Wright

“Don’t mess with anybody on a Monday. It’s a bad, bad day.”
― Louise Fitzhugh, Harriet the Spy

“In my life long study of human beings, I have found that no matter how hard they try, they have found no way yet to prevent the arrival of Monday morning. And they do try, of course, but Monday always comes, and all the drones have to scuttle back to their dreary workday lives of meaningless toin and suffering.”
― Jeff Lindsay, Dexter in the Dark

“Sunday just came down like a nine-pound hammer … it was tainted with the closing-in feeling of the loss of freedom. Because after the sun went down, it came back up on Monday morning. And you had to go to work five more days. And it sucked.”
― Larry Brown, A Miracle of Catfish

“On Monday mornings I am dedicated to the proposition that all men are created jerks.”
― H. Allen Smith

“I’ve always hated Mondays, the whole lot of them. Too much whiplash, snapping the tired masses to attention. God’s way, perhaps, of reminding us that we are not masters of our fate, no matter how deluded we became during the weekend respite.”
― Jonathan Hull, Losing Julia

“Life is like Friday on a soap opera. It gives you the illusion that everything is going to wrap up, and then the same old shit starts up on Monday.”
― Stephen King, Duma Key

“Today I am doing better than yesterday, and tomorrow I hope to be doing better than I am today. And two days from now? Well, that’s a Monday, so I’ll be feeling shitty.”
― Jarod Kintz, Who Moved My Choose?: An Amazing Way to Deal With Change by Deciding to Let Indecision Into Your Life

To begin with, I dined there on Monday, and once a week is quite enough to dine with one’s own relations.”
― Oscar Wilde, The Importance of Being Earnest

“If each day is a gift, I’d like to know where to return Mondays!”
― John Wagner

“The cross comes before the crown and tomorrow is a Monday morning!”
― C.S. Lewis

“There isn’t a Monday that would not cede its place to Tuesday.”
― Anton Chekhov

“Monday isn’t that bad to be honest, What makes it bad is living in it.”
― Day

“The awfulness of Monday mornings is the world’s greatest common denominator. To the millionaire and the coolie it is the same, because there can be nothing worse.”
― Kenneth Fearing, The Big Clock

“Like the song says, rainy days and Mondays always get ya down.”
― Haruki Murakami, Pinball, 1973

“If there was a day of the week I could skip it would be Monday. Clients had too much time to think and worry over a long weekend and by Monday they were often riddled with fear and anxiety.”
― Stan Turner

“By and large I think art is made by people who have discipline married to talent in sufficiently large amounts to work even if they don’t feel like it. Anybody can get maudlin and decide to write poetry at 11 at night; the question is, can you do it at 8:30 on a Monday morning..?”
― Clive Barker

“Sometimes it pays to stay in bed on Monday, rather than spending the rest of the week debugging Monday’s code.”
― Dan Salomon

“Monday is a sloppy umbrella day, which makes everybody a little blue. Cole, dropping by my office in the morning, wastes no time in blowing off steam. “You can TAKE this DAY and SHOVE IT where the SUN DOESN’T SHINE,” he growled.”
“Too late. Somebody already DID THAT.”
― Giorge Leedy

“Mondays are the start of the work week which offer new beginnings 52 times a year!”
― David Dweck

“When you start to do the things that you truly love, it wouldn’t matter whether it is Monday or Friday; you would be so excited to wake up each morning to work on your passions.”
― Edmond Mbiaka

Quotes by the Author

“Dear Monday, if you wouldn’t have been there, I would have hated Tuesdays.”

“Change is inevitable, and so is Monday, but it does not change.”

“Monday gives a chance for a new beginning.”

“Start the Monday with a fresh cup of happiness.”

“Monday, like any other day, gives you an opportunity to make a difference to this world.”

In short, we can sum up our feelings about Monday in this adapted nursery rhyme ―

Monday, Monday
Go Away
Do Not Come Again
On Any Other Day

The above quotes will certainly justify your feeling of, ‘Oh no, today is Monday!’, but at the same time help you beat the Monday blues. Nevertheless, if you have any other witty quote worth sharing about the devilish Monday, feel free to use the comments section below. It will at least bring a smile on your face when you’re at work in office. In the end, when everything else fails, only humor works. You cannot avoid a Monday, hence, it’s best to have some fun at the expense of Monday. Dear Monday, I wish the feeling was mutual, and you hated visiting me. 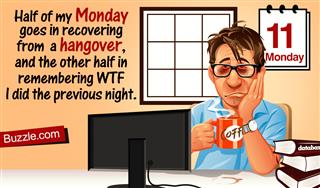 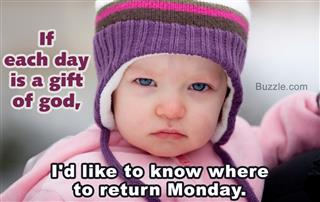 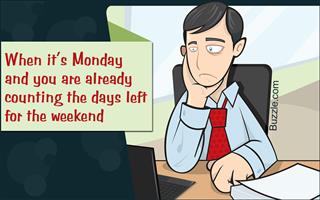 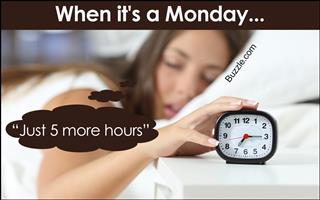