40 Most Famous Zombie Quotes Ever

Most of us are fascinated by zombies, and love reading about them or watching zombie movies. This Quotabulary articles lists some quirky, funny, and interesting zombie quotes to thoroughly entertain you. 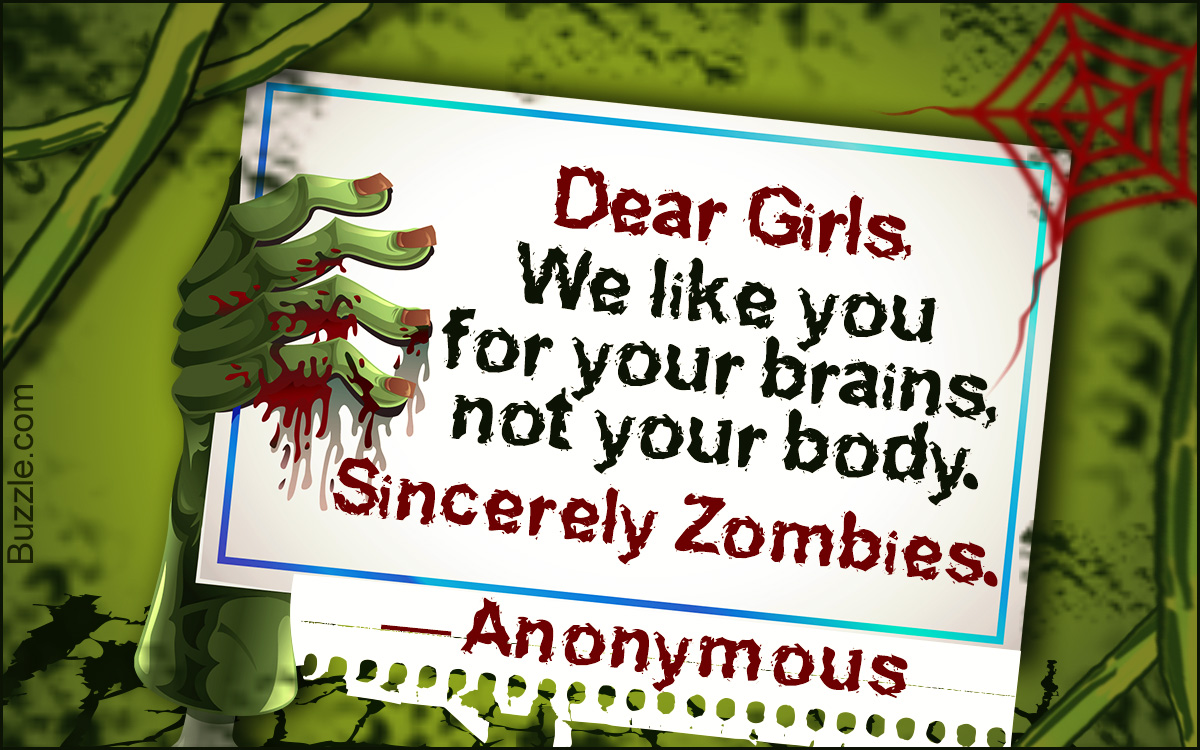 Most of us are fascinated by zombies, and love reading about them or watching zombie movies. This Quotabulary articles lists some quirky, funny, and interesting zombie quotes to thoroughly entertain you.

“Hello,
We wood like to visit for a Midnight Znack. How does ice cream and brains zound?
Sincerely, the zombies.”
― Plants vs. Zombies

Today, zombies and post-apocalyptic zombie stories have become very popular. There are so many movies, television shows, and books on zombies. There are also many humorous as well as witty quotes about zombies made by different people. All the craze surrounding zombies is definitely not unfounded. They sure are interesting creatures, albeit a little (too) dumb! So, we can laugh at their expense as they won’t mind; obviously as they are half-dead.

Laugh Your Brains off with These Funny Zombie Quotes

“A mind is a terrible thing to waste.” ― Mr. Zombie

“To have and to hold, in sickness and in health, unless you become a zombie – then I promise to shoot you in the head.” ― Anonymous

” When life closes a door, it opens a window. And then, zombies climb in and eat you.”     ― Anonymous

“My friend “M” says the irony of being a zombie is that everything is funny, but you can’t smile, because your lips have rotted off.” ― Isaac Marion, Warm Bodies

“This is the way the world ends; not with a bang or a whimper, but with zombies breaking down the back door.” ― Amanda Hocking, Hollowland

“Dear girls, We like you for your brains, not your body. Sincerely, Zombies.”
― Anonymous

“If I come back as a zombie I’m eating you first!” ― Anonymous

“Asks for high five gets a bullet in the head.” ― Anonymous

“A non-frightening zombie is a lame zombie.” ― Scott M. Gimple

“I love zombies. If any monster could Riverdance, it would be zombies.” ― Craig Ferguson

Quotes Related to Zombies in the Bible

“And this shall be the plague with which the Lord will strike all the peoples that wage war against Jerusalem: their flesh will rot while they are still standing on their feet, their eyes will rot in their sockets, and their tongues will rot in their mouths.” ― Zechariah 14:12 ESV

“Your dead shall live; their bodies shall rise. You who dwell in the dust, awake and sing for joy! For your dew is a dew of light, and the earth will give birth to the dead. Come, my people, enter your chambers, and shut your doors behind you; hide yourselves for a little while until the fury has passed by.” ― Isaiah 26:19-20 ESV

“And in those days people will seek death and will not find it. They will long to die, but death will flee from them.” ― Revelation 9:6 ESV

Quotes from The Walking Dead

“Christ promised a resurrection of the dead, I just thought he had something a little different in mind”. ― Hershel Greene

“In a world ruled by the dead, we are forced to finally start living.” ― Robert Kirkman

Don’t you get it? We ARE The Walking Dead!” ― Robert Kirkman

“When there’s no more room in hell, the dead will walk the earth.” ― Dawn of the Dead

“In those moments where you’re not quite sure if the undead are really dead, dead, don’t get all stingy with your bullets.” ― Zombieland

“You’re all going to die down here.” ― Resident Evil

“Now, I know you’re not supposed to have a hand gun until you’re twelve… but it can come in real handy.” ― Fido

“They’re coming to get you, Barbara.” ― Night of the Living Dead

“In the brain and not the chest. Head shots are the very best.” ― Fido

“Yeah, they’re dead. They’re all messed up.” ― Night of the Living Dead

“You know, surprisingly, they don’t sell a lot of brains in the local 24-hour grocery store around the corner from my house.” ― Rusty Fischer, Zombies Don’t Cry

“Nothing is impossible to kill. It’s just that sometimes after you kill something you have to keep shooting it until it stops moving.” ― Mira Grant, Feed

“Make the most of your life. You only live once. Unless of course the event of a zombie apocalypse!” ― Zombiesurviver

“The more I know about people, the more I love zombies.” ― J.J. Zep

“With anything, it either is, or it isn’t. There is no is isn’t. Except for zombies-who are both dead and not dead at the same time. ” ― Jarod Kintz, So many chairs, and no time to sit

“In you, she saw hope. You mean she saw his next meal.” ― Nicki Elson, Hans & Greta: a Twisted Fairy Tale Novella

“He was drop-dead gorgeous and I, well I was just … dead.” (Tera Hightower, Dead Chick Walking)” ― Ace Antonio Hall

“I don’t think anyone wants to cuddle a zombie.” ― Norman Reedus

“A zombie film is not fun without a bunch of stupid people running around and observing how they fail to handle the situation.” ― George A. Romero

We hope you enjoyed the above quotes! Zombie movies, games, books, and shows are becoming popular, which shows the fascination people have for them. In fact, many people believe in the concept of zombie apocalypse too. Well, each person has his own opinion. Till then, they are coming … to eat your brains!