Whether we believe it or not, racism affects and influences us in one way or the other. In this Quotabulary article, we have compiled a list of strong and empowering quotes about racism, and hope that we get the strength to fight for equality.

Whether we believe it or not, racism affects and influences us in one way or the other. In this Quotabulary article, we have compiled a list of strong and empowering quotes about racism, and hope that we get the strength to fight for equality.

Stop dividing people into ‘us’ and ‘them’.

Whether you’re on the receiving end of racism, or are a witness to one, there are two things you can do―say something, or say nothing. You decide.

Even as the world changes and grows, sadly, racism is here to stay. People aren’t born racist; it’s not in our genes. As we grow up, our views and beliefs of people all around the world is formed. And when this opinion is foul, it can lead to abusive or aggressive behavior towards people of another community.

For decades, we have witnessed and read stories about people wanting to make a difference, and fighting till the very end. Little by little, a change has been viewed but not to the extent where racism is eliminated forever. Keeping this in mind, we have put together a list of famous quotes about racism, along with anti-racism and racist comments.

“To live anywhere in the world today and be against equality because of race or color is like living in Alaska and being against snow.”
― William Faulkner

“Racism, in the first place, is a weapon used by the wealthy to increase the profits they bring in by paying Black workers less for their work.”
― Angela Davis

“Racism is man’s gravest threat to man – the maximum of hatred for a minimum of reason.”
― Abraham Joshua Heschel

“In this country American means white. Everybody else has to hyphenate.”
― Toni Morrison

“Don’t you know sugar is brown first? White folks couldn’t stand the fact that something so sweet shared the same color as the people who cut the cane, slopped the hogs and picked the cotton. So they bleached it to resemble them, and now they done gone and fooled everybody. You included.”
― Bernice L. McFadden

“The American white relegates the black to the rank of shoeshine boy; and he concludes from this that the black is good for nothing but shining shoes.”
― George Bernard Shaw

“Racism, xenophobia and unfair discrimination have spawned slavery, when human beings have bought and sold and owned and branded fellow human beings as if they were so many beasts of burden.”
― Desmond Tutu

“You learn about equality in history and civics, but you find out life is not really like that.”
― Arthur Ashe

“People know about the Klan and the overt racism, but the killing of one’s soul little by little, day after day, is a lot worse than someone coming in your house and lynching you.”
― Samuel L. Jackson

“Hating people because of their color is wrong. And it doesn’t matter which color does the hating. It’s just plain wrong.”
― Muhammad Ali

“No human race is superior; no religious faith is inferior. All collective judgments are wrong. Only racist make them.”
― Elie Wiesel

“Racism is beyond common sense and has no place in our society.”
― Steven Patrick Morrissey

“I have a dream that my four little children will one day live in a nation where they will not be judged by the color of their skin but by the content of their character.”
― Martin Luther King, Jr.

“I was raised to believe that excellence is the best deterrent to racism or sexism. And that’s how I operate my life.”
― Oprah Winfrey

“Achievement has no color.”
― Abraham Lincoln

“No one is born hating another person because of the color of his skin, or his background, or his religion. People must learn to hate, and if they can learn to hate, they can be taught to love, for love comes more naturally to the human heart than its opposite.”
― Nelson Mandela

“The color of the skin is in no way connected with strength of the mind or intellectual powers.”
― Benjamin Banneker

“America needs to understand Islam, because this is the one religion that erases from its society the race problem. Throughout my travels in the Muslim world, I have met, talked to, and even eaten with people who in America would have been considered white, but the white attitude was removed from their minds by the religion of Islam. I have never before seen sincere and true brotherhood practiced by all together, irrespective of their color.”
― Malcolm X

“We are not myths of the past, ruins in the jungle, or zoos. We are people and we want to be respected, not to be victims of intolerance and racism.”
― Rigoberta Menchú

“I believe in white supremacy, until the blacks are educated to a point of responsibility. I don’t believe giving authority and positions of leadership and judgment to irresponsible people … I don’t feel we did wrong in taking this great country away from [the Native Americans] … Our so-called stealing of this country from them was just a matter of survival. There were great numbers of people who needed new land, and the Indians were selfishly trying to keep it for themselves.”
― John Wayne

“The black is a better athlete to begin with because he’s been bred to be that way… This goes back all the way to the Civil War when during the slave trading, the owner – the slave owner would breed his big black to his big woman so that he could have a big black kid.”
― Jimmy “The Greek” Snyder

“You cannot go to a 7-11 or Dunkin Donuts unless you have a slight Indian Accent.”
― Joe Biden

“I give interracial couples a look. Daggers. They get uncomfortable when they see me on the street.”
― Spike Lee

“We got to do something about these Asians coming in and opening up business and dirty shops. They ought to go.”
― Marion Barry

The fact is―racism is racism, no matter what. Regardless of its origin, when an individual degrades, insults, or makes fun of people from a different culture, it is unacceptable. The color of our skin or the religion we choose to follow cannot determine or give someone the right to demean us. Keep your eyes and ears open for those who make racial comments, and gather enough courage to defend yourself and any other individual you may come across. 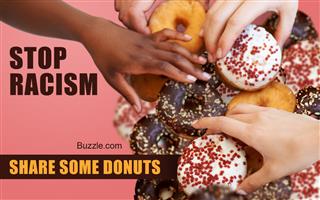 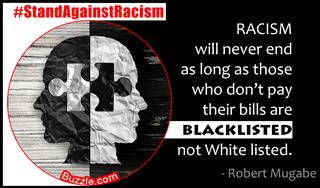 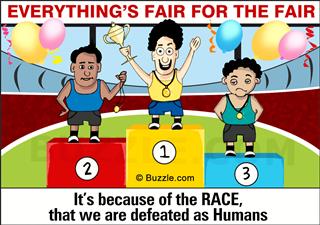