Famous Irish Quotes That are Equally Witty and Meaningful

Sometimes a simple quote speaks volumes about the culture and beliefs of a particular country. Here is a collection of such famous, funny, and meaningful Irish quotes that will help you know more about Ireland and Irish people. 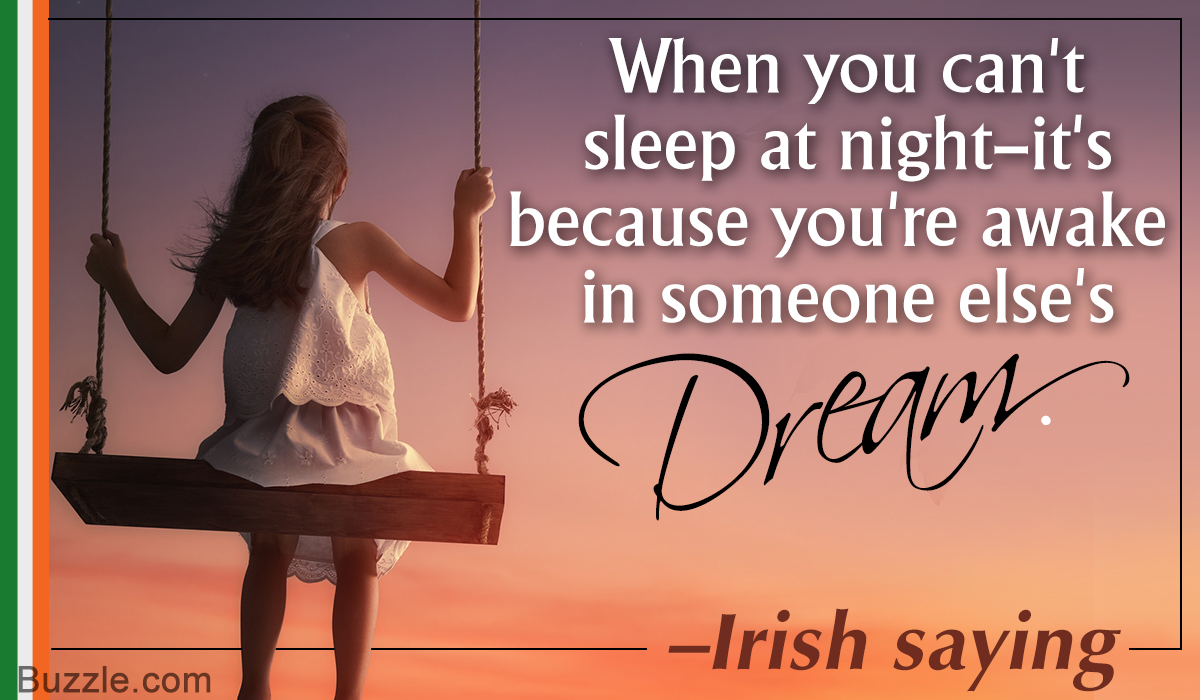 Sometimes a simple quote speaks volumes about the culture and beliefs of a particular country. Here is a collection of such famous, funny, and meaningful Irish quotes that will help you know more about Ireland and Irish people.

The Irish are known for their humor, wit, and strong character. There have been several notable Irish writers and authors whose contribution to literature is simply remarkable. Their witty and meaningful quotes are sure to make you laugh and think at the same time.

Here are famous quotes by famous Irish people, about the Irish people, their culture, their thoughts, etc. Also mentioned here are some of the most popular Irish proverbs and blessings.

A best friend is like a four leaf clover: hard to find and lucky to have.
― Anonymous

Nature magically suits a man to his fortunes, by making them the fruit of his character.
― Ralph Waldo Emerson

There are only two tragedies in life: one is not getting what one wants, and the other is getting it.
― Oscar Wilde

The more I see of the moneyed classes, the more I understand the guillotine!
― George Bernard Shaw

The Irish seem to have more fire about them than the Scots.
― Sean Connery

A wish that every day for you will be happy from the start and may you always have good luck and a song within your heart.
― Irish Blessing

We are ready to die and shall die cheerfully and proudly, you must not grieve for all of this.
― Padraig Pearse

May the roof above us never fall in.
And may the friends gathered below it never fall out.
― Irish Blessing

When Irish eyes are smiling, watch your step.
― Gerald Kersh

The Irish are a very fair people, they never speak well of one another.
― Samuel Johnson

The reasonable man adapts himself to the world; the unreasonable one persists in trying to adapt the world to himself.
― George Bernard Shaw

A gentleman is one who never hurts anyone’s feelings unintentionally.
― Oscar Wilde

Making peace, I have found, is much harder than making war.
― Gerry Adams

One of the very best rules of conversation is to never say anything which any of the company wish had been left unsaid.
― Jonathan Swift

A life making mistakes is not only more honorable, but more useful than a life spent doing nothing at all.
― George Bernard Shaw

Though the pen is mightier than the sword, the sword speaks louder and stronger at any given moment.
― Leonard Wibberley

There are only two kinds of people in the world, The Irish and those who wish they were.
― Irish saying

Always remember to forget, the friends that proved untrue. But never forget to remember those that have stuck by you!
― Irish proverb

Irish diplomacy is the ability to tell a man to go to hell so that he looks forward to making the trip.
― Irish saying

The future is not set, there is no fate but what we make for ourselves.
― Irish proverb

You’ve got to do your own growing, no matter how tall your grandfather was!
― Irish proverb

Do not resent growing old. Many are denied the privilege.
― Irish proverb

A quarrel is like buttermilk: once it’s out of the churn, the more you shake it, the more sour it grows.
― Irish proverb

Mothers hold their children’s hands for just a little while…
And their hearts forever.
― Irish proverb

‘Tis better to buy a small bouquet and give to your friend this very day,
Than a bushel of roses white and red to lay on his coffin after he’s dead.
― Irish proverb

I can resist everything but temptation.
― Oscar Wilde

There is nothing half so sweet in life as love’s young dreams.
― Thomas Moore

First love is only a little foolishness and a lot of curiosity.
― George Bernard Shaw

I have spread my dreams beneath your feet;
Tread softly because you tread on my dreams.
― W.B. Yeats

The play was a great success but the audience was a disaster.
― Oscar Wilde

Here’s to our wives and girlfriends: May they never meet!
― Groucho Marx

In heaven there is no beer… That’s why we drink ours here!
― Anonymous

The problem with some people is that when they aren’t drunk, they’re sober.
― W. B. Yeats

All the world’s a stage and most of us are desperately unrehearsed.
― Sean O’Casey

Every absurdity has a champion to defend it.
― Oliver Goldsmith

But the greatest love: the love above all loves,
Even greater than that of a mother…
Is the tender, passionate, undying love,
Of one beer drunken slob for another.
― Irish Ballad

You can use these quotes for toasts or for statuses and cards. Lastly, here is one of the best Irish saying ever: